A Recursive Method for Improving Network Scale-Up Estimation for Hidden Populations
Roundtable Presentation at the annual meeting of the American Sociological Association, Chicago, IL by Patrick Habecker and Kirk Dombrowski.

A Novel Formalization of Peer Influence Incorporating Both Self- and Alter-Directed Sentiment and Disposition
(click here for slides)
Sunbelt Conference presentation by Kirk Dombrowski and Bilal Khan in Tampa, Florida

Peer influence has received considerable attention from social network analysis, and more broadly. The availability of topologies that go beyond ego networks has opened considerable debate about commutative effects, while time series network data has allowed for the separation of assortative effects from behavior change. Missing from most accounts, however, is information about—and means for incorporating into network models—peoples’ dispositions towards their own behaviors, as well as the behaviors of their peers. Someone can be both indifferent to their own smoking behavior while disapproving of the same behaviors in their close associates, and vice versa.

This paper explores a method for formalizing network data that includes both disposition towards ego’s own behavior, and his/her disposition toward the same behaviors in those around him/her. The ability to incorporate such data into models that normally deal only with similarity or difference of behavioral state moves our models a step closer to what intuition tells us to be an important aspect of peer influence—how those around us “feel” about our habits, behaviors, or personal states. The paper describes the formalization process and applies it to social network data on alcohol co-use in a northern indigenous community in North America.

A Model for Understanding Structure Versus Agency in the Participation of Minors in the Commercial Sex Market
(click here for slides)
Paper Presentation at the Midwest Sociological Society 2014 Annual Meeting by Courtney Thrash, Kirk Dombrowski, and Bilal Khan

Nights on the Street and Victimization among Homeless Youth (click here for poster)
Poster Presentation at the American Society of Criminology 2014 Annual Meeting by Patrick Habecker, Dan Hoyt, and Les Whitbeck

A Model for Understanding Structure versus Agency in the Participation of Minors in the Commercial Sex Market
(click here for poster)
Poster Presentation at the Society for the Scientific Study of Sexuality 2014 Annual Meetings by Courtney Thrash, Kirk Dombrowski, and Bilal Khan

ADHD Symptoms and Substance Use among Indigenous Adolescents: A Hazard Analysis (click here for poster)
Poster Presentation at the Society for Research on Adolescence 2014 Annual Meetings by Miriam Martinez, Brian Armenta, and Les Whitbeck

In the Spring of 2013 Kirk Dombrowski visited Brown University to give the Haffenreffer Museum of Anthropology’s Shepard Krech III Lecture, on “Understanding Arctic Communities on the Brink of Self-Governance,” and a workshop on “Reaching ‘Hard-to-Reach’ Populations for Research in Anthropology, Sociology, and Public Health.” While there, he visited the Haffe

nreffer’s Collections Research Center in Bristol (photos below). Dombrowski’s visit was funded by donors to the Shepard Krech III Lecture fund, the National Science Foundation Office of Polar Programs, and ARCUS, the Arctic Research Consortium of the United States. 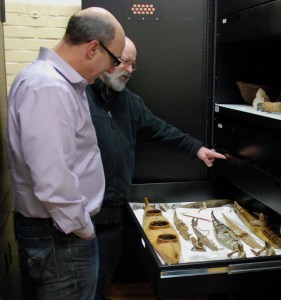 A video recording of the lecture can be found here.

In Feburary of 2013, Kirk Dombrowski (then a member of the faculty at CUNY) presented a lecture at the University of Nebraska-Lincoln as part of the Minority Health Disparities Initiative. The discussion focused on techniques used to discover and understand hidden and hard-to-reach populations. Hidden and hard-to-reach populations represent critical challenges for social scientists interested in issues of social well-being. Recent epidemiology has shown that even small populations can have a disproportionate influence on public health, even while remaining invisible to conventional research techniques. Methamphetamine users in New York City represent such a population, with high levels of risk for injection and sex-related diseases and unknown interaction with surrounding populations. And like many hard to reach populations, the stigma associated with drug use has made the population largely resistant to participation in research, even when that research is aimed at addressing their own health needs. The lecture discussed the use of social network-based methods to recruit NYC Meth users, and how data related to recruitment can be combined with sociological and ethnographic perspectives to better understand local market dynamics, market topology, and even to produce a rigorous population estimate. The slides for the presentation can be found here: UNL Meth Paper.

The final report for the Nain was delivered to the community in the Summer of 2012. This important part of Community-Based Participatory Research included meetings with community survey participants and several presentations. The slides from the community presentation are available here: Nain Presentation Final. In addition, a project brief was presented to the community, with multiple copies retained by the Nunatsiavut Research Committee.