Just under six months have passed since we received funding for the Injection Risk Networks project in rural Puerto Rico. Since then, the project team has been working tirelessly to get everything ready for the first data collection phase, which will begin in February 2015. The project (now also known as VAS: Vida, Acción, Salud) has a local field research office in Cidra, Puerto Rico. We also have a fantastic team of three experienced social science researchers: Roberto Abadie, Carmen Ana Davila, and Angelica Rivera.

So how did we get here? Oftentimes, it seems like someone waves a magic wand at grant funded research projects and poof!–the data has been perfectly collected and published! I’m here to share a little truth talk: that is not how it works. Blood, sweat, and tears have all literally been included in the six months of project setup so far.

First, we worked hard to refine the questionnaires. After multiple drafts and the input of nine different team members, we finally reached the final versions. These were then programmed into a software program called Voxco, which is what we will use to complete the computer assisted personal interviews during the project. Voxco software is so perfect for field work for so  many reasons–it deserves its own blog post (stay tuned!).

Then, we submitted all of the project protocols to the Institutional Review Board (IRB) at the University of Nebraska and at the University of Puerto Rico School of Medicine. The IRB’s job is to protect human subjects and it’s a crucially important process to all research. The IRB approves everything the participants will see (consent forms, resource brochures, questionnaires, respondent driven sampling coupons) and everything that participants will do as part of the research. Similarly, we completed an Institutional Biosafety Committee protocol because the project involves blood (fingerpricks to complete rapid HIV and Hepatitis C tests). All of these protocols need to be approved before data collection begins.

In November 2014, a few of the project team members (myself, Kirk Dombrowski, Ric Curtis, and Roberto Abadie) traveled to Puerto Rico to set up the local infrastructure with Juan Carlos Reyes (UPR). We found a local office space to rent (in Cidra, Puerto Rico), opened a local bank account, and shadowed our research partners, El Punto en la Montaña, while they worked their usual needle exchange routes in the study area. In short, making connections with people, scouting out the study area, and securing a space to actually do work were the main goals of the first trip.

While all of this had been happening, I was also working hard on various “administrative” tasks. I was working to hire our field team members by UNL, set up accounts with the companies that sell HIV and Hepatitis C tests, obtain a CLIA Waiver in Puerto Rico, print the paper project materials, and write the training manual.

And last week, Kirk Dombrowski & I flew back to Puerto Rico to set up the office and start training the field team!! The first thing we did was work to get electricity and internet hooked up in the office. This proved to be a more difficult task than we ever imagined, and took us on what I fondly refer to as “the wild goose chase of central Puerto Rico”. While the process was frustrating at times (visiting over 15 different people and offices to obtain permits, inspections, and approval letters!), it ultimately helped us with “team building” and making connections in the community. In this attempt to obtain electricity, we met countless community members who were incredibly helpful, interested in the project and our work, and happy to have us around. We also bought office furniture and office supplies (four carts and a few hundred dollars later.. photo below). 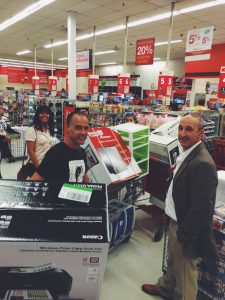 Training the field team is crucially important to collecting quality data. We are so lucky that we have a team with years of experience collecting social science data (over 30 years combined!). However, they still needed to be trained on this project’s procedures and protocols, the consent form, the interviews, and how to do the tests. We discussed interviewing techniques that help collect unbiased data, the sampling methods, and the specifics of testing. Carmen and Angelica are pictured below completing a practice HIV test on Roberto. 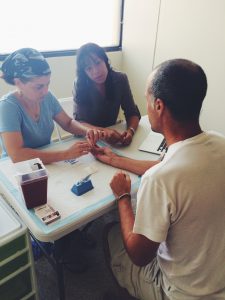 We were also fortunate that our Communications Director, Colleen Syron, could fly out to the island to attend the last few days of training with one of her art students, Devon Stanczyk. They came loaded with camera gear and signs for the office. We want to document this project, from the setup phase all the way through the data analysis phase, and Colleen is making that possible. I will write a separate blog post with more details about the communications aspect of this trip, but for now I’ll just say that I am extremely excited that we have video footage and quality photo stills to help to tell the story of what this research finds. The photo below is Roberto Abadie talking about the project and his motivation for HIV and Hepatitis C research. 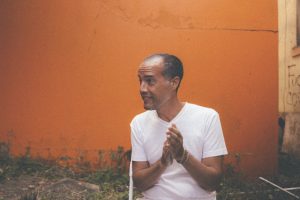 New Journal Article on Homeless Women with and without Children

New Journal Article on Homeless Women with and without Children