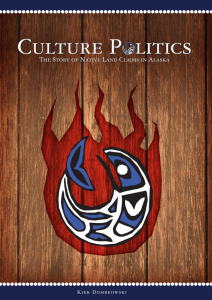 Culture Politics: The Story of Native Land Claims in Alaska

This book traces the history of indigenous land claims in Southeast Alaska. Based on three years of residence and over two decades of research and writing, Culture Politics lays out how Native land claims in Alaska came about, and why they have proven so divisive for many Alaska Native communities. Reframing and going beyond Dombrowski’s earlier book, Against Culture, the current volume looks in depth at the trials and tribulations of subsistence hunters and fishers in villages like Hydaburg, Kake, Klawock, and Hoonah. Each of these communities has faced the same onslaught of timber harvesting and the collapse of the local fishery. Some have grown as a result, while others have shrunk. And some have spawned radical Pentecostal churches that have taken a stance against Native culture. Reactions like these are surprising, more so when they are most stridently advocated by Natives themselves. This book describes why this is so, and traces these processes back to the Land Claims process itself. Culture Politics is aimed at both popular and academic audiences. While the social and political processes it describes are complex, the language of the text is intended for ordinary adult readers. Those interested in Native American affairs, the history of Alaska, or the effect of environmental development on northern communities will find much to appreciate in this compelling, first-hand telling of life on the edge of America.