A State of Irony 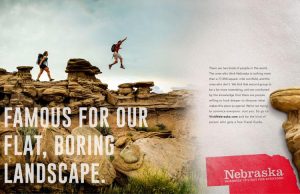 it ranks 50thin the list of states people would like to visit. It is in this context that the Nebraska Tourism Commission recently revealed the state’s new slogan: Honestly, It’s Not for Everyone. A witty campaign that juxtaposes assumptive phrases about Nebraska with images in direct contradiction to the sentiment. While locals may lament, begrudge, or bemoan this cheeky replacement of “The Good Life,” Nebraska did receive national attention for it, arguably garnered for its clear sense of irony, smartly rendered through honest assessment.

And, wasn’t that the point after all? To appeal to those people who have no idea, or the wrong idea, about who or what Nebraska is? A challenge but also an acknowledgement of the governing outsider belief of Nebraska as so boring as to be quite literally the least interesting state to visit. A lingering question for the social scientist is how this use of irony is so successful in provoking praise and attention? Is it perhaps the incisive knowledge that irony belies? Knowledge not only of the rules of the game, but of how to subvert those rules? And, what of irony’s relationship to the State?

The State governs by a set of rules, or rather, creates an image of itself as governed by a set of rules which become embedded in an ideology. Ideology is oxygen, it surrounds us, permeates our senses, and we are (those few theorists not withstanding) largely oblivious to it. It shapes our interpretation of our surroundings, influences our meaning-making, makes present some ideas while obscuring others. While it is not quite accurate to say that ideology is bound by or governed by a set of rules, people often rely upon, and abide by, a set of rules consistent with a particular ideology. However, it is possible to “tease” these rules, to make a game of them, which is to be understood as distinct from outright disregard or rebellion against the rules. In this making a game of, one reveals not only a knowledge of how those rules should be followed but also of how to play, to create humor, through those rules. In this way, irony also requires a certain creativity, an imagination, an ability to think both within and beyond these rules. But what of the State which perpetuates itself as bound by, governed through, a set of rules taken to be, for the most part, steadfast? Here rests the paradox of irony. While it is anathema to the State as such, irony serves a deeply functional purpose. As that great cinematic vision of the late twentieth century The Matrix reminds us, the system requires tension, imperfections, choice as it were, and a system under tension is necessarily dynamic requiring changes, alterations, adaptations. This is the crux of irony’s function for the State: adept use of it identifies an awareness of the dynamics and, as importantly, an ability to imagine and create those changes and alterations that while perhaps challenge, still acknowledge the rules of the game. To return to our example of the Nebraska Tourism Commission, the campaign does acknowledge the less-than-flattering reputation of the state, but it does not challenge, or create play through, those icons most sacred to the state: the farmer and the ranch.